The Presence of Crow 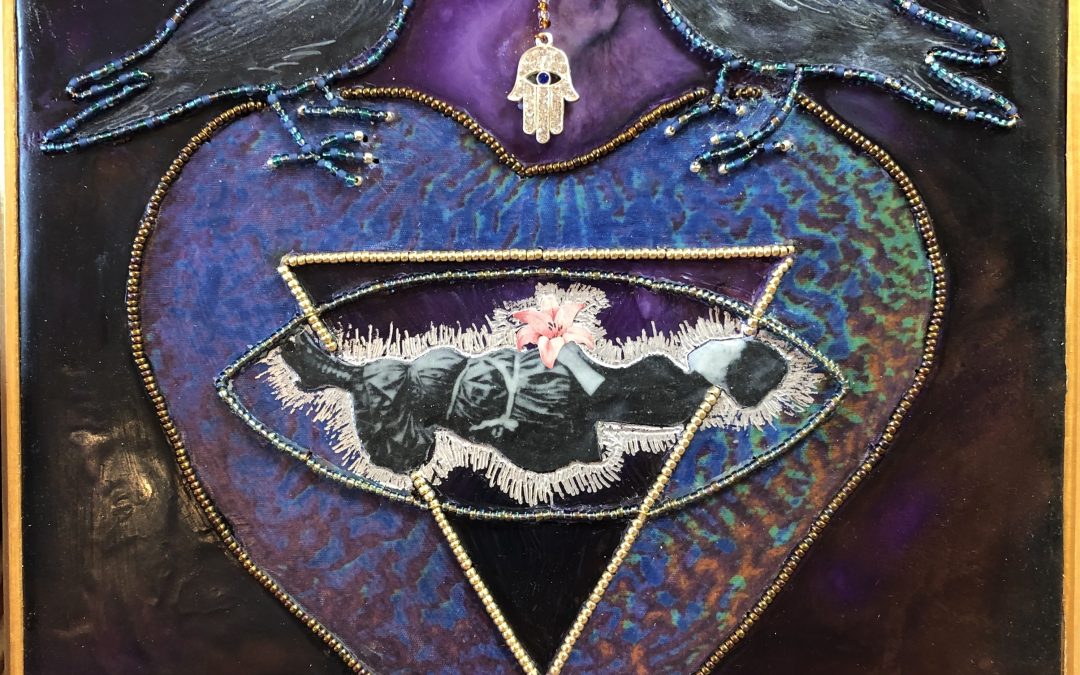 Crows (and ravens), like many creatures of air, land and water, have significance within many cultures.  Their presence in my artwork tap into those meanings, and depending on the context, dial down into a particular cultural reference.

Some of the historical meanings give explanation to various notable bird features; one story describes the crow as once being white, but having betrayed the Greek god Apollo, was scorched by the same lord, resulting in the comparatively (within the bird kingdom), banal black coloring.  There are variants of this theme in many native American wisdom traditions.  The corvids (family of crows/ravens) have a definite kinship to the promethean tale of absconding fire from the gods, or being punished by fire, culminating in its black color, and hoarse voice.  Amongst the punishment stories, the observant natives, noticed that crow interfered with their success in buffalo hunt, landing on buffalo’s back and whispering in their ear, that the hunters were nearby.  Crow was charred as punishment, also resulting in their guttural sounding voice.

But even if crow doesn’t match one’s idea of a beautiful songbird, and often their presence is experienced as annoying, one cannot deny their cleverness, and recognize their tenacity and fierce presence.  In some wisdom traditions, they were the only bird to survive the Flood, another historical account common to many peoples across the globe.  They are claimed to be an escort for the dead to journey to safeguard the soul along its’ perilous journey to the Other Side / Underworld.

It is this reference that I find particularly meaningful; the crow as Protector for we humans, as we move through various dimensional realms.  Some Native American tribes believe crow to be the Keeper of Law, an Oracle of divination/magic and a Symbol of Rebirth and Change.  It is a reminder that we have the power to dwell in both the physical and spiritual worlds and to keep a foot in both, allows us to make choices that fulfill us in both realms.  Because they’ve known and embrace their own darkness, we too, can do likewise.  They are willing to guide us through our own dark night of the soul, enabling our evolution of consciousness to arrive at a higher perspective.  Crow is our ally, especially when we are at a cross roads.

Crow imagery reflects my love of the natural world, and recognition that we are surrounded by Earth wisdom, willing to guide and illuminate our lives, especially during this time of tremendous change.  I hope you are open to receive the presence of the crow as a sign of protection, guidance and wisdom. 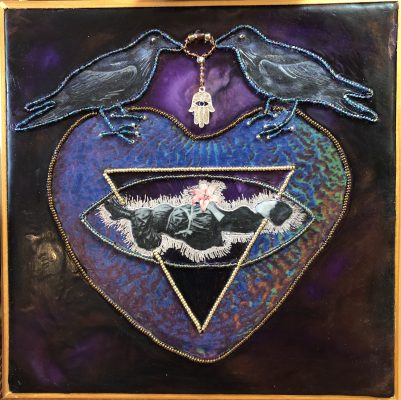 This artwork, ‘Protected Metamorphosis’ is exemplary of the role of crow.  Two crows work together to dangle a protective hand over the heart that holds a woman in limbo.  She is restful, still, and holds a lily, symbol of regeneration and rebirth.  She is within her own elliptical aura of transformational energy, grounded by a downward pointed triangle.  The crows, intelligent magicians of the air realm, hold the transformational space for enlightenment to unfold.