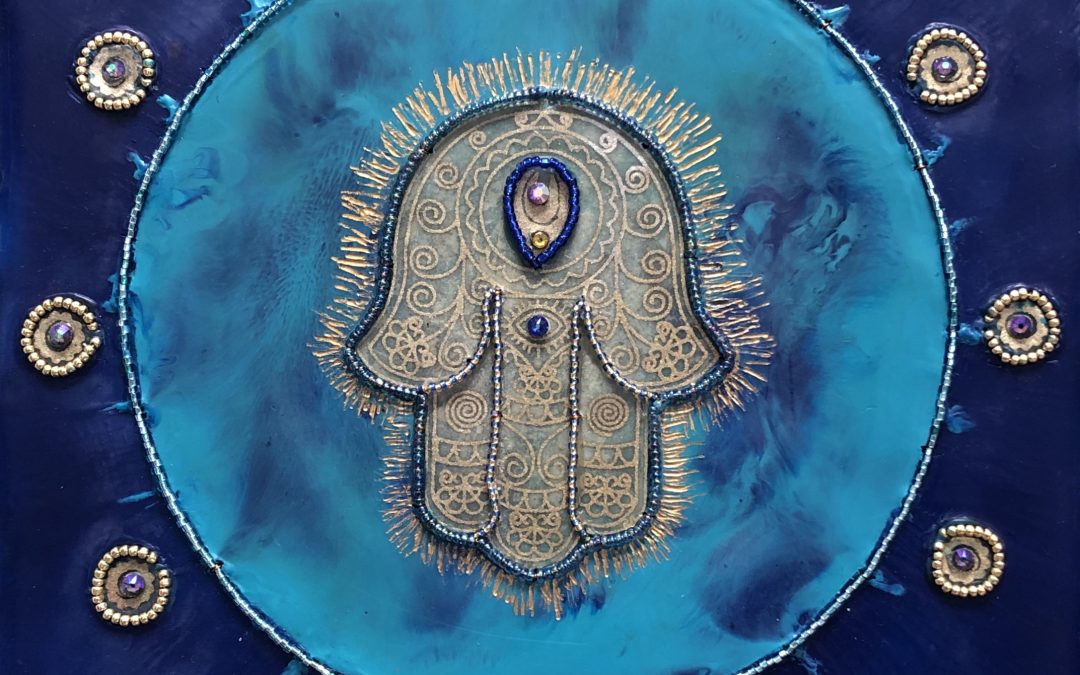 Like many contemporary artists looking over the edge, I often don’t thoroughly understand some of the meanings of my visual creations, until some outer world circumstances provide a larger context. I am, of course, consciously using imagery that reflects my current observations, research and experiences, but there are often unconscious conditions and energies that I am tapping into that become clear later. This is definitely the case with a recent Series of work I’ve been creating. 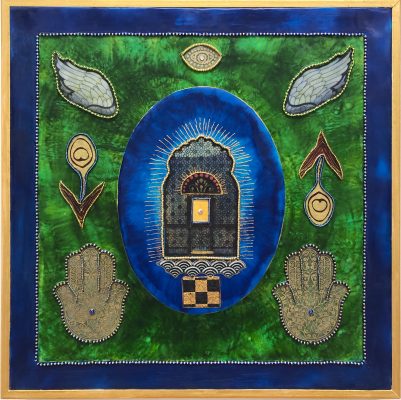 In this post, I’ll explore the use of the Hamsa hand that has appeared in my artwork within the last few years, and most recently, in earnest and with persistence, prior to the Covid 19 outbreak. As an indicator of protection within the current circumstances we find ourselves in, it has a great deal of relevance.  It is but one tool providing an antidote to the omnipresent fear collectively oppressing us.

You may be aware that I use cross cultural symbols as part of my personal visual language; it’s my attempt to find the unity in the diversity of spiritual traditions, and to anchor the divine within the mundane. The Hamsa hand is illustrated in different ways, but most share these features: a hand with 5 fingers; these fingers are pressed together, not splayed and at least one Eye in the palm’s center.  The hand may be upward or downward pointing. The most common form, show in the image here, shows the baby finger and thumb as identical in shape and size.  This symmetry is pleasing, lends itself to decorative embellishment and recasts it’s meaning from physical into the ethereal, one that acts upon the psyche.

Historically, the Hamsa/Khamsa has been traced back to ancient civilizations in the Mediterranean / North African region; it was prominent by 1500 BCE. Earliest findings reveal its association with the Semitic Goddess, Tanit, who protected Carthage.  Like most deities and symbolic imagery, over time, conquering tribes/peoples incorporated existing motifs into their iconography.

Thus, the Jews, Christians and Muslims who successively occupied this region where the Hamsa originated, all now claim the Hamsa as symbolic of similar aspects within their respective belief systems. The Hamsa symbol also emerged further east, in ancient India where Hinduism and Buddhism took root. These religions have variations of the Hamsa in their iconography, alongside a larger vocabulary of mudras, (hand positions) intended to engage and bestow healing and benefic qualities.

Within Judaism, the Hamsa hand is known as the Hand of Miriam, referring to the sister of the Jewish prophet Moses. Within Christianity, the Hand of Mary, refers to the mother of Jesus; both mortal women were portals of protection under the aegis of the unified divine principal of one God. Within the Islamic tradition, the symbol is known as the Hand of Fatima, referencing a righteous daughter of the profit Muhamad. Because Islam has strictures against human representation, the Hamsa hand is typically accompanied by holy Quranic calligraphic text and void of the eye in the palm.  You can see the variations of the Hamsa in the art piece to the right, ‘Liberation ~ Manifestion’; the 7 bodily chakras/energy vortices, heal and upgrade under the protection and guidance of the Hamsa hands. https://www.debbiemathewart.com/product/liberation-manifestation 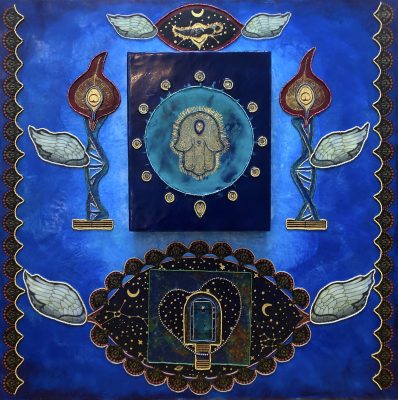 Essentially, the Hamsa is a sign of protection that also represents blessings, power and strength, and is seen as potent in deflecting any form of enemy.  It is present within the artwork, ‘Wisdom Path’, wherein a small figure, in repose within an eye-shaped window of the night sky, is uplifted by wings of divinity.  On either side of the Hamsa Hand are DNA candlesticks, holding the wisdom flames of the bodhi leaf, with winged leaves. The lower horizontal plane contains another eye~window to the cosmos, within which lies a heart and door/portal to an upgraded perspective and dimension post transformation.  All of the imagery here suggests a pathway through the larger circumstances we humans and the Earth find ourselves within this pandemic.  It is time to be still, re-evaluate and re-align to our greater potential as we acknowledge the reality of our shared humanity and interdependence within nature.  We are called to transform, individually and collectively.

Engage this benevolent hand of protection, (literally or in your imagination), towards yourself and others, so we traverse this delicate bridge to the other side, safely and at this time of great shift, let us, together, create Heaven on Earth.