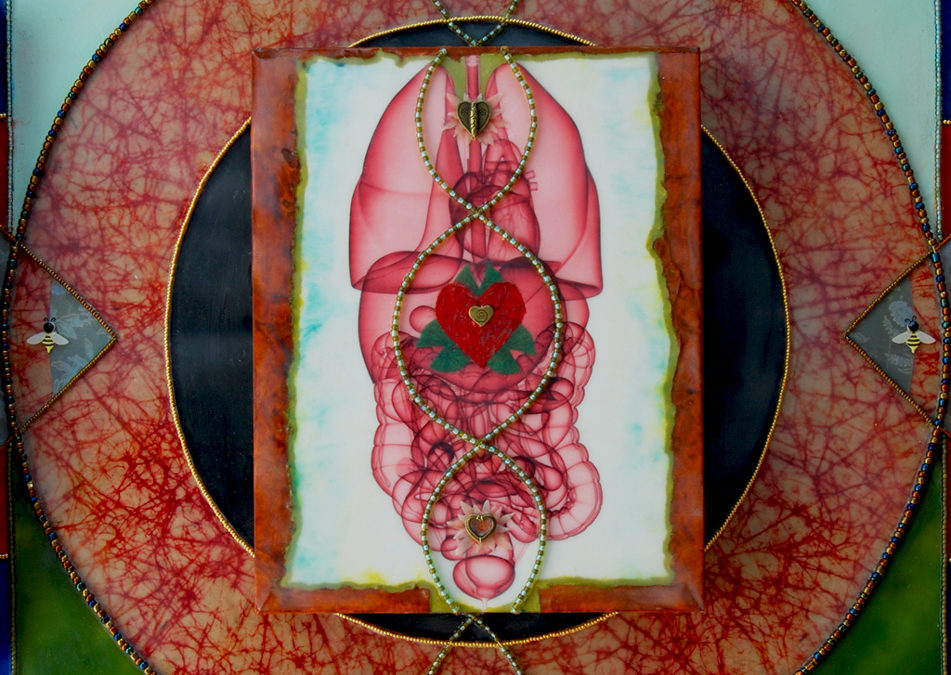 Included in the Exhibition “Pollination: Bees and Buddies’,  is this artwork titled: Archetypal Bodies 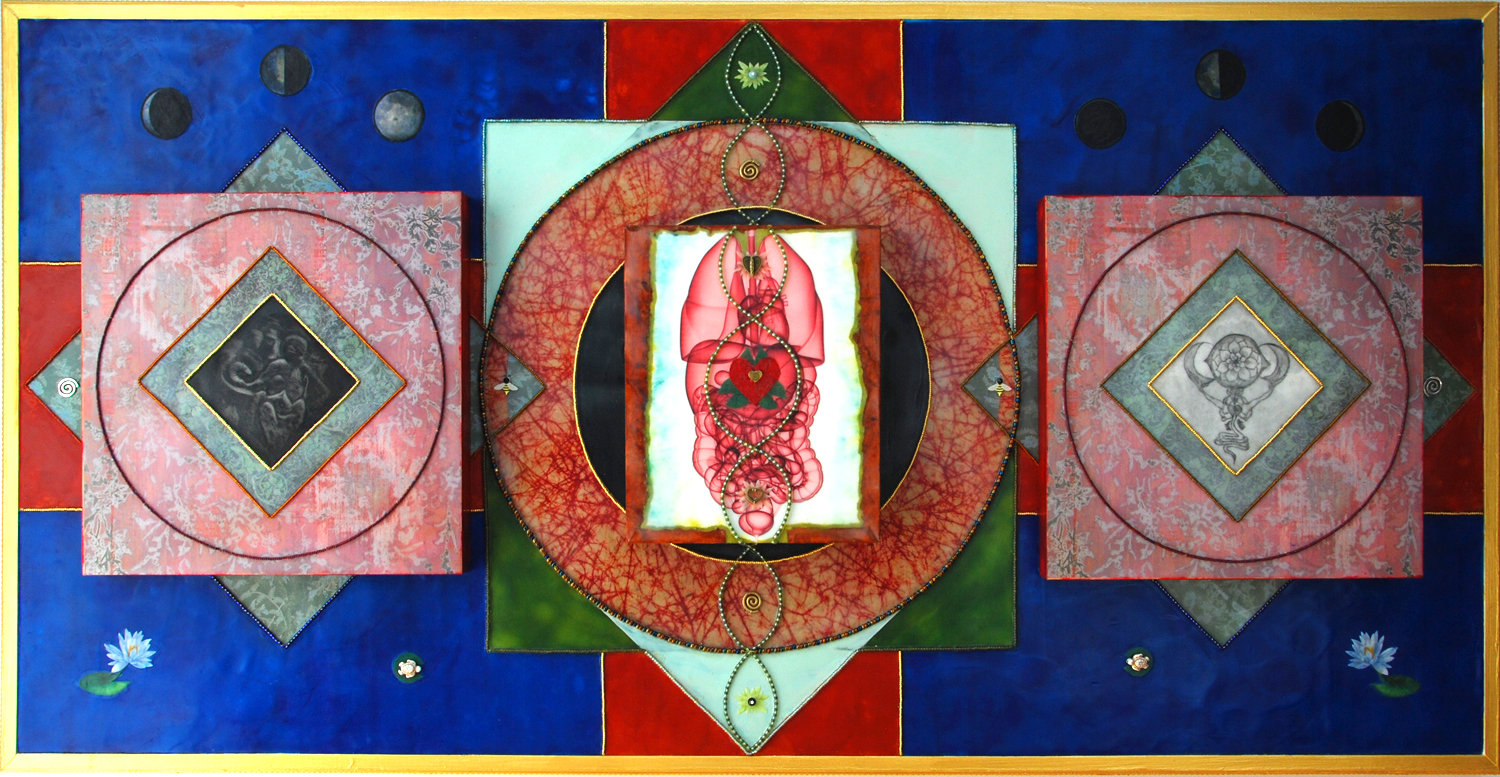 At first blush, you may ponder how this piece fits the theme… bee presence is minimal (can you find them?), and the relationship of the imagery to ‘Bees, Pollinators & Buddies’, isn’t obvious. Well, of course there is the fact that I use beeswax as my main media. Beyond this however, and consistent with my artistic approach, I explore the symbolic, trans-conscious level of our knowing.  In this realm of the archetypal, experiences resonate with deeper truths, tap into patterns that are trans-personal, yet reverberate within.

My focus is to integrate beyond the omnipresent duality of perception: good/bad, white/black, masculine/feminine. Typically, such perception is embedded in hierarchical structures. I use imagery to explore a terrain beyond duality, even beyond the Feminine Archetype, which is still very much maligned, despite each human having both masculine and feminine characteristics within.  So, a point of historical note, the feminine was associated with snakes, owls (& other birds), cats (including lions/tigers) and yes, BEES.

If you look at ancient sculptures, reliefs, and paintings from BCE (before current era), especially from the middle east (Sumeria, Anatolia etc.), when the female form as a goddess, (signifying Life) was prominent, she might be part snake, part bird, part bee, or have a beehive headdress, multiple ‘breasts’ (archeologists interpret as bee eggs sacs). The artwork on the left, called ‘Milk and Honey’ is the other piece in this show.  The Goddess might also have these various creatures around her; an owl on either side, a lion at her feet.  Researchers interpret their presence as twofold: the creature and the Goddess were mutually protectors of each other; and, She exemplified innate characteristics of the creature. The social structure of the bee aligns with the relational feminine energy (as compared to hierarchical masculine); the creation of something sweet, turning necter into honey.  It is also true that women were traditionally the plant gatherers, and ultimately the domestic gardeners, who relied on bees for fertilizing their produce. Ancient societies, especially those that honored women, expressed gratitude to/for these creatures, and wild nature that supported life. Ultimately these creatures became symbols of the feminine archetype.

In ‘Archetypal Bodies’, a horizontal format represents the feminine in archetypal structure, as do the 2 symbolic ‘female’ images, on both sides of center.

The left panel is a dark image of ‘Venus of Lascaux’, (purported to be up to 30,000 years old), a remnant of the past. Her body has substance, Earthy; she holds a crescent moon with 13 lines marked into it, a calendar integrating the 13 lunar cycle equal to a solar year.

The image on the right is a symbolic, almost alien in form, female only by the presence of breasts; her head is a flower/sun/eye, flanked on either side by crescent moons held up by her hands/bird claws. Her body is sinuous, emerging out of a snake, coiled, arising from the depths. The center/chest area is dominated by a heart, which feeds to/from the lunar and solar energies above. 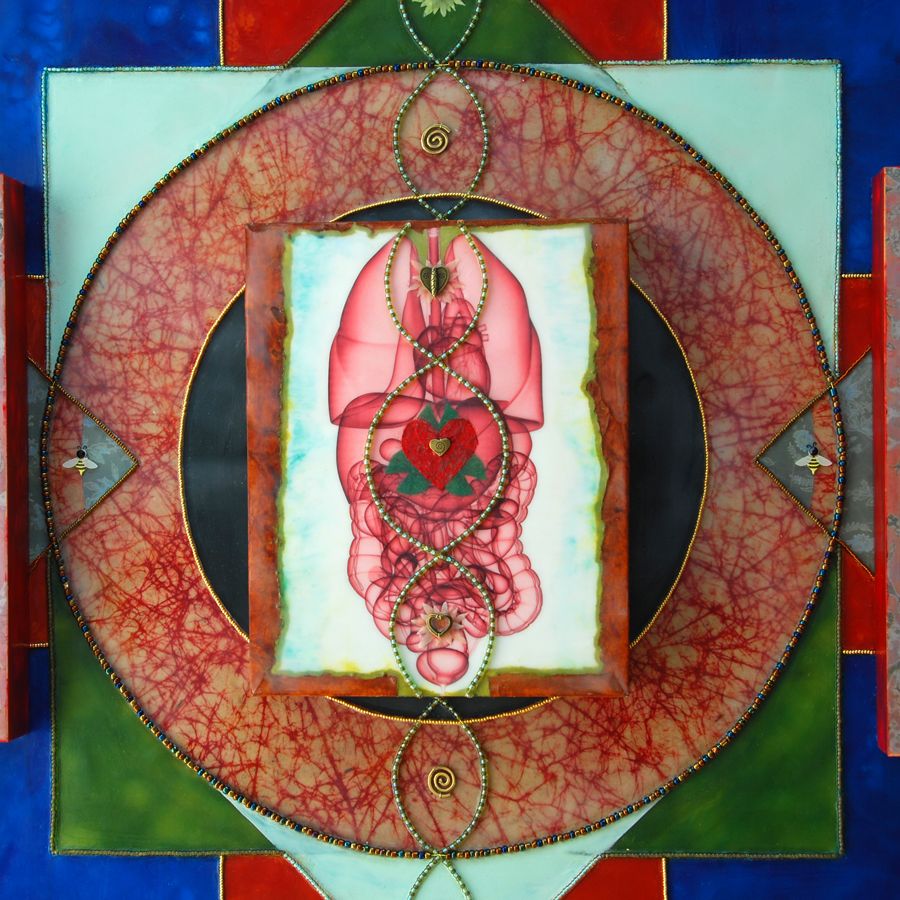 The central panel is a photo of human internal organs;  akin to  a scientific illustration, the translucent organ body shines with beauty; it is neither male or female – no reproductive organs are present.  Along the central vertical line of the body, and extending above and below, are two undulating bead lines, like a DNA helix; within  each space created where the curved lines intersect, is a symbolic shape denoting one of the seven chakras. The physical body is connected to divine energies through these energetic vortices, the center of which contains a heart. The wisdom heart energy of compassion, wisdom and love, overlaying the organ body, indicates the subtler intelligence lying within the physical body.  Human bodies and subtle energies are more alike than different.  We are also of the same energies as all life forms on earth; which deserve our gratitude. The presence of the turtle (Earth), lotus / lily flowers (beauty from mud), moon phases (intuitive knowledge) and the bees (cooperation to attain sweet harmony), are symbols suggesting a desirable evolution for humanity – to work together to create harmony and wholeness.